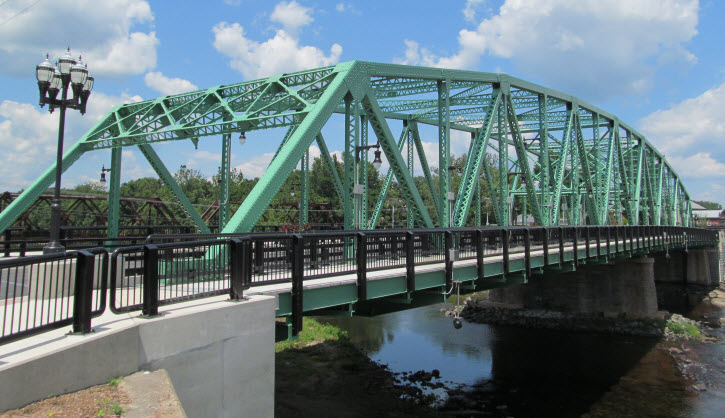 The low flow is then classified according to the following criteria:

There are four methods available for computing losses through the bridge (cross sections 2 to 3):

The user can select any or all of these loss methods to be computed. This allows the modeler to compare the answers from several techniques all in a single execution of the program. If more than one method is selected, the user must choose either a single method as the final solution or direct the program to use the method that computes the greatest energy loss through the bridge as the final solution at cross section 3. Minimal results are available for all the methods computed, but detailed results are available for the method that is selected as the final answer. A detailed discussion of each method follows.

Figure 1: Cross sections near and inside the bridge

The second step is a momentum balance from cross section BD to BU (see Figure 1). The equation for this step is as follows:

The final step is a momentum balance from section BU to section 3 (see Figure 1). The equation for this step is as follows:

Guidance on selecting drag coefficients can be found in Table 1 below.

The momentum method provides detailed output for the cross sections inside the bridge (BU and BD) as well as outside the bridge (2 and 3). The user has the option of turning the friction and weight force components off. The default is to include the friction force but not the weight component. The computation of the weight force is dependent upon computing a mean bed slope through the bridge. Estimating a mean bed slope can be very difficult with irregular cross section data. A bad estimate of the bed slope can lead to large errors in the momentum solution. The user can turn the weight force on if he or she feels that the bed slope through the bridge is well behaved for their project.

During the momentum calculations, if the water surface (at cross sections BD and BU) comes into contact with the maximum low chord of the bridge, the momentum balance is assumed to be invalid and the results are not used.

The Yarnell equation is sensitive to the pier shape (K coefficient), the pier obstructed area, and the velocity of the water. The method is not sensitive to the shape of the bridge opening, the shape of the abutments, or the width of the bridge. Because of these limitations, the Yarnell method should only be used at bridges where the majority of the energy losses are associated with the piers. When Yarnell’s equation is used for computing the change in water surface through the bridge, the user must supply the Yarnell pier shape coefficient, K.

The low flow hydraulic computations of the Federal Highway Administration’s (FHWA) WSPRO computer program has been adapted as an option for low flow hydraulics in HEC‑RAS. The WSPRO methodology has been modified slightly in order to fit into the HEC‑RAS concept of cross section locations around and through a bridge.

The incremental energy losses from cross section 4 to 1 are calculated as follows:

Where C is an empirical discharge coefficient for the bridge, which was originally developed as part of the Contracted Opening method by Kindswater, Carter, and Tracy (USGS, 1953), and subsequently modified by Matthai (USGS, 1968).

Where KBU and KBD are the total conveyance at cross sections BU and BD respectively, and LB is the length through the bridge. Similar equations are used for the friction losses from cross section 2 to BD and BU to 3.

Whenever class B flow is found to exist, the user should run the program in a mixed flow regime mode. If the user is running a mixed flow regime profile the program will proceed with backwater calculations upstream, and later with frontwater calculations downstream from the bridge. Also, any hydraulic jumps that may occur upstream and downstream of the bridge can be located if they exist.

Printing the Map View Map View not displaying any graphics